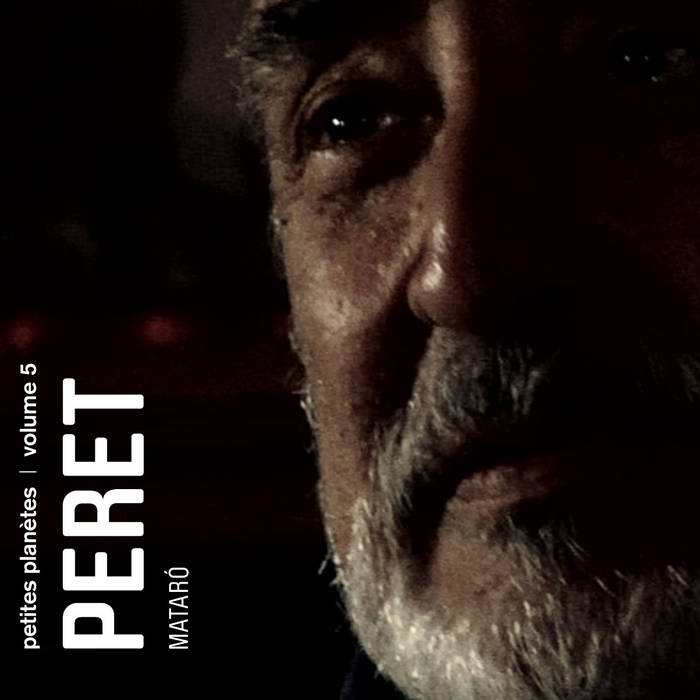 
LOOKING AT THE LEGEND

Nobody was talking about Peret in Barcelona, or at least not in the circles we were going around with. It wasn't a well hidden secret though, his face and recent albums were adorning the walls and the music shop windows in El Raval. We were often passing in front of this cheerful visage without knowing exactly what he was all about, nobody in the environment of local music ever mentioned his name. Maybe we were not spending our time with the right people for this kind of 'popular' music - in general, you can imagine it's about something popular when a face becomes so familiar and so unknown at the same time.
I was giving at the period some classes in a little cinema school in Gracia, La Casa Del Ciné, and the idea was to explore some other musical worlds than the ones we were researching with la Blogotheque, with whom i was still working with in a regular manner. And it was during an exchange about those musical characters that the name of Peret was pronounced, probably coming with the term 'catalan rumba' which was already sounding weird. Opinions were various, some were attached to 'Peret the legend', while others were laughing overtly.
We then found an album to know what it was all about, and what was meaning this term of catalan rumba that he was supposed to be the inventor of - people were also saying he was the inventor of a unique style of playing guitar, 'el ventilator', and in my mind it was almost too much. The album itself was over-produced, crushing its beautiful melodies under unnecessary featurings - yet David Byrne himself was singing on one track, which would make us think we were touching something there. And it's also while listening to such a production that you think you will do better, and more simple. It's Joana one of the students from the cinema school who found his contact.

It's an old but very lively man who welcomes us in a café terrace in Mataró, his hometown, an hour away north of Barcelona. He drives a big car, got a very beautiful and powerful presence, and eyes are turning on him in the street - yes, it's Peret, it's him, say the bystanders. The talk is nice, Peret listens carefully our film proposal and answers simply, 'no'. No time, no energy. He says it kindly, without severity, he is just not interested.
Along travels, along encounters, we learn to communicate differently, more easily with people from very diverse horizons. If i learned something on the road, it's for sure to look in the eyes, when you listen and when you talk. To look straight into the eyes in a very assured and imposing way, without animosity at all, just to affirm your attendance. Peret just said 'no', no thanks, so all you could do was to do the 'look', to look very very deeply and try to touch the soul. It might seems stupid like that but it's exactly what happens - to look straight into the eyes to go over the eyes, to touch the little thing behind. Not letting go anything and add the right words to it - about the importance of the project, about the absolutely primordial nature of the experience we are gonna live together.
Then he just said something like 'come tomorrow, in the afternoon', gave us some informations on how to reach his house, and the next day we were in this huge residence over the valley and the sea, surrounded by kids running in all directions. Himself was playing the role of the patriarch who amuses the family, covering his old hits, entraining the other generations in his past and his gypsy origins. His way of playing and his presence were magnetic, he was having fun impressing us, and we were loving it. It was a sunday afternoon, and we suddenly had the feeling to be part of a great spanish fresco.